Roger Deakins, ASC, BSC “wanted the barracks to look dreamy and disorienting, with a very sharp crisscross pattern created by the windowpanes.” To create this effect for the wide shot, the filmmakers positioned Alpha 4K X Lights and Arri 6K X Lights on Condors outside the windows, and employed some additional units to generate arbitrary patterns on the walls.
NIGHTEXT 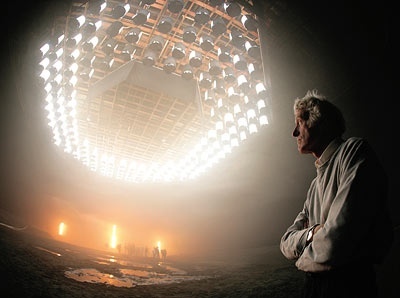 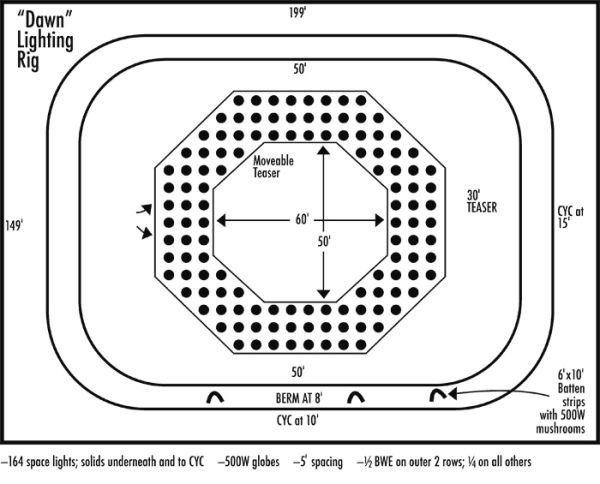 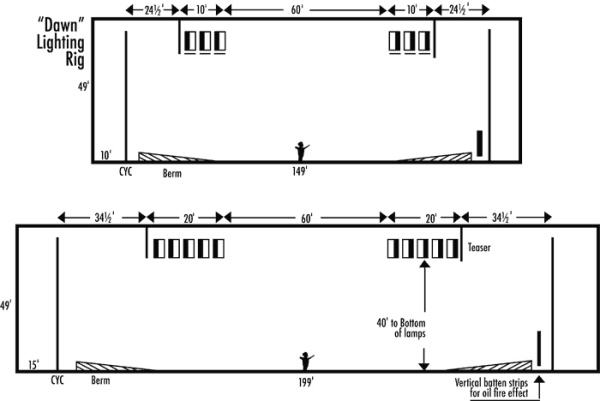 To create the effect of a coming dawn, the crew hung 6-light space lights fitted with a combination of 1⁄4 and 1⁄2 blue gel, also on dimmers. “What was unique about that setup,” says Napoletano, “was that we put solids in the bottom of the lights.” Instead of sending light straight down on top of the subjects, the space-light arrangement “let the light out of the side and allowed an ambient fill of blue light into the stage.” The whole rig was then skirted with black drapes to protect the cyc from getting too much light. I wanted to create a very dull directionless light. By blacking the bottom rings of the space lights I felt that the light was coming at the set from a little more of a horizontal direction. Of course, the space lights had to be lowered as much as possible and the solid cuts added to those on the outside made less difference, but that was my theory at least.
NIGHTINT

Instead of throwing a light on the audience using a large single source, Deakins placed 45 Tweenies overhead in a triangular arrangement, with the apex at mid-audience. Some of the lights were gelled blue, others stayed at 3200°K, and all were wired to a dimmer board programmed to replicate the changing light intensities of the projected movie. “I first used this type of grid on O Brother, Where Are Thou? when we were shooting in a Mississippi theater,” Deakins recalls. “It was a protected historical building with a very low ceiling - I had no more than a foot between the top of frame and the ceiling in which to rig lights.” In Jarhead, by graduating the light’s intensity and reducing it toward the edges, he generated a soft, pulsating wash over the audience. In both cases I had no headroom to create a soft effect other than by using tubes or bare bulbs, which would have been too omnidirectional for me in both cases. You do have to be aware of the multiple shadows as they do become apparent if you see the light falling on a flat surface but are hardly a problem on a face.
Source:
http://www.rogerdeakins.com
comments powered by Disqus