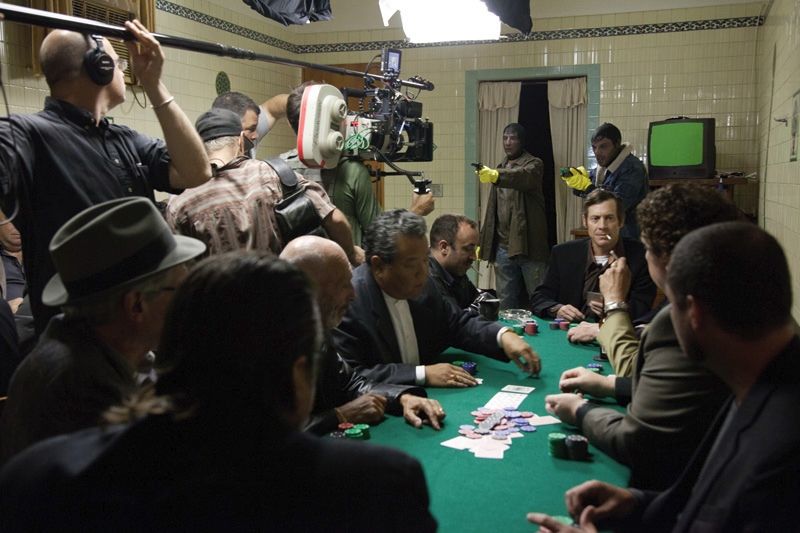 It was all toplight, but I did add some fill for the eyes. We added greenish fluorescent practicals above instead of Kino Flos. We corrected some of the green, but kept a little bit. I’ve never had much success making Kino Flos look green; I get better results running green tubes and pulling the green." We quadrupled the Cool White fixtures overhead by adding industrial fluorescents with a switch bay to turn individual units on and off," continues Kemp. “We created a blue-green environment with a bed of Cool White fluorescents above and used black teasers to keep light off the walls. Greig’s work on these kinds of scenes was often a mix of toplight and eyelight, and we added very little below; we kept the camera side darker and lit from the top or backlight zones. We’d steal some toplight with beadboard bounces or maybe add a 2-by-2 Kino Flo with Cool White fluorescent tubes, and for close work we used a Litepanels Mini corrected to Cool White fluorescent." Because the yellow-tile walls were so reflective, Fraser also employed some negative fill. “On the tighter shots," Kemp explains, “we brought in 4-by-4 floppies to get unwanted [bounce] off the actors’ faces."
(ACM Oct 2012)
DAYINT 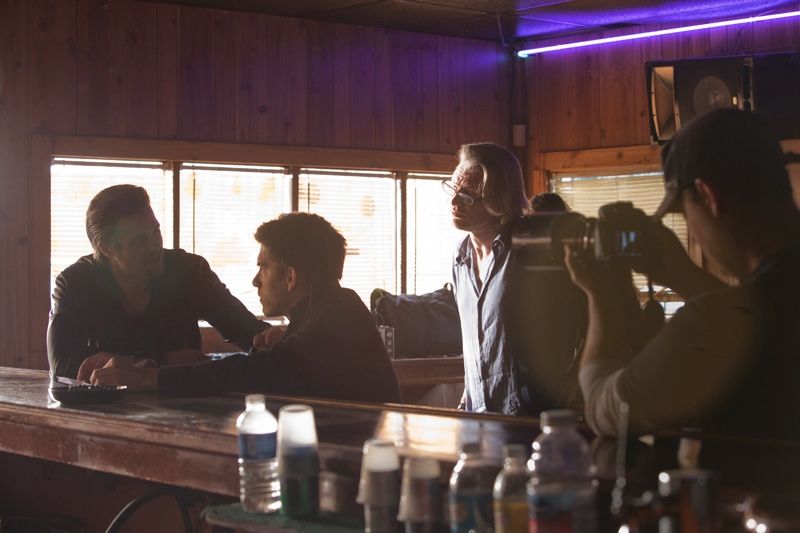 Pitt and McNairy were backlit by a 100K SoftSun positioned to hit the windows of the location. “It wasn’t a specular source; it was a nuclear ambient source, directional without being harsh," says Kemp. “We used the SoftSun to create explosive ambience and supplemented that with three Arrimax 18Ks for more directional pushes. We filled and shaped the faces inside with the Creamsource Classics and Litepanels LED 1-by-1s and Minis on the bar. We played the Creamsources very low and very diffused, as if daylight was bouncing back at the actors." Blocked sunlight with 20-by solids on stands in the street outside.

Another striking use of strong soft light occurs in a hotel room where Jackie confronts Mickey about his performance on the job. Fraser had three 18K Arrimaxes shooting down directly into the windows from across a courtyard, and not much else. The sheer curtains on the window transform the 18Ks into a powerful soft source. “When the window was off camera, we let hard light hit the sheers to create a soft ambience, and when it was on camera, we softened the 18Ks," says Kemp. “There was very little [lighting] inside the room, just a Litepanels 1-by-1 or Mini for eyelight."
CARtag

Pitt and Jenkins “were solely lit with the two Creamsources Classic LED for those scenes. Though the lighting was simple, the car interior “was a big grip job" because of the black solids used to create negative fill, according to Kornemann. “We had multiple 20-by-20 solids flying in the air, and we were dancing those around the car all day long," he recalls. “Two of them were on stands, and one was on a flyswatter hanging off a Condor. We had four to six lines going back to the crane and to the ground for stability in the wind." 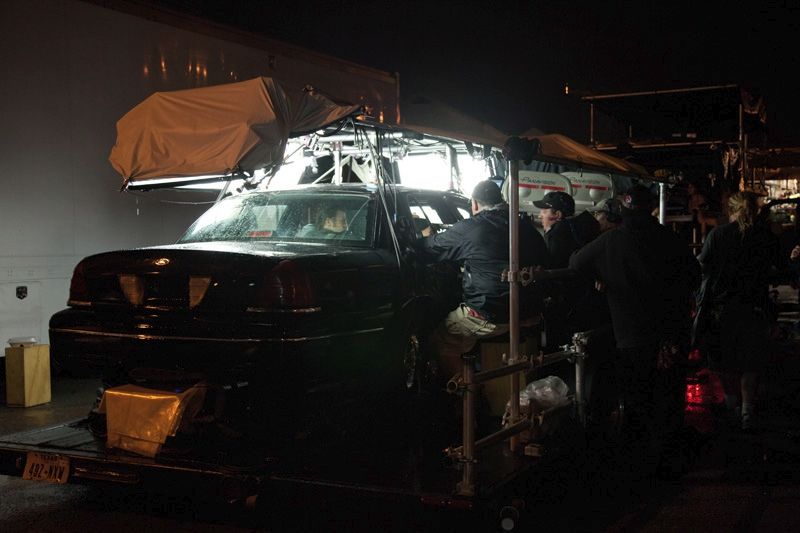 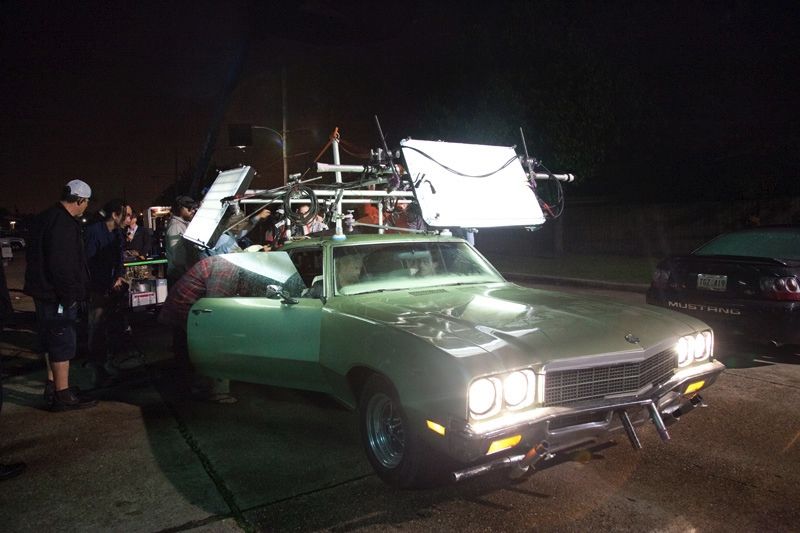 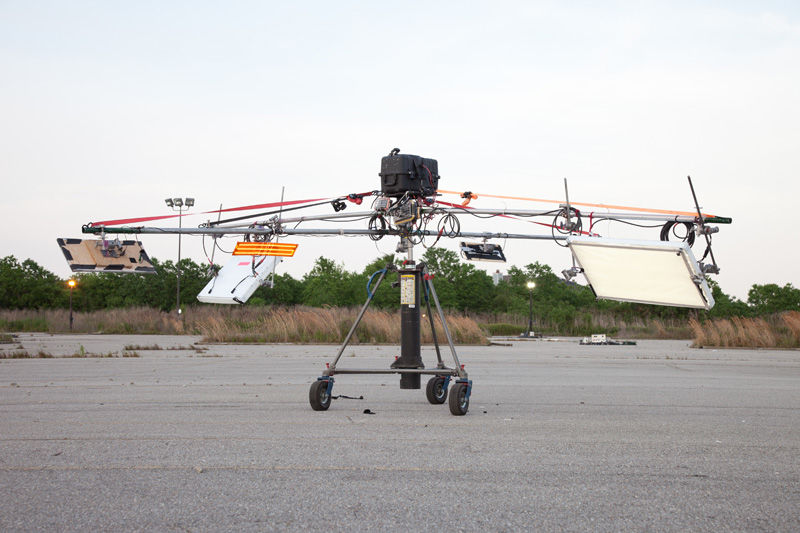 “helicopter rig" for poor-man’s-process work. It comprised LiteRibbon LED panels of various color temperatures, DogPads, a wireless DMX receiver and a large battery cell (on the platform atop the central pivot).
NIGHT EXT
Fraser’s treatment of night exteriors in the film is notable for the absence of strong visible sources. Instead, a distinctive, low-contrast pall is sprinkled with bright glints of light. “I love sourceless night," he says. “When you go out in the middle of nowhere, you don’t see backlights and frontlights. Ever since I started shooting, it’s been my passion to create sourceless nights. I wanted the nights in this film to have an enveloping ambience." Sometimes that one light is a Condor with a huge softbox, and we’ll make 2-foot incremental moves with it until we find the sweet spot that doesn’t give the source away.
The toplight coating in Killing Them Softly was provided by two types of softboxes suspended from Condor cranes. One comprised Arri X HMIs, the other Kino Flo Image 85s, and both were modified with Diving Bells, tall cones of Full Black Grid and Duvetyn with a wide base that can accommodate gels or diffusion. (Created by Kornemann, Diving Bells were also used extensively by the team on Let Me In.) The HMI configuration included four 4Ks in a grid “pointing through a 12-by with controllable siders," says Kemp. “We added blue and green gels to them to match metal-halide, and we used DMX ballasts so we could control them from the ground wirelessly with Luminaire software that was set up by [best boy electric] Theo Bott. That saved us from putting a man in the Condor." The Image 85 softbox was less powerful, comprising six eight-tube units of 600 watts each that were fitted with “daylight tubes with green and blue [gels] added to match metal-halide," says Kemp. The X-Light softbox was used for most of the high-speed photography, but the Image 85 variant was used for close-ups because it was cool enough to be positioned fairly close to the actors and offered a more appealing quality of light.

Fraser used the Image 85 softbox for toplight and augmented it with dozens of small background lights, including industrial metal-halide units on tall Mombo Combo stands and 8' industrial fluorescents. (All of these were powered by small putt-putt generators.) “We put commercially available compact fluorescents on C-stands or on buildings in the distance to create specular points of light. “They were only 13 to 27 watts apiece, but they read as background streetlights — or any type of source, really. We hung them everywhere; they just float in space and give depth to the scene. We used metal-halides either in frame or as crosslight to create those pools of light you typically see on city streets. We dressed all this to shot. If we had a frame that included a large area of black information, we’d fly these units in the background to give some depth. “Many cinematographers would have used five Condors to light a scene like that, but Greig’s approach created natural depth with great efficiency," adds Kemp. “It wasn’t in our budget to have layers of Condors lighting the background, and in any case, that wasn’t the aesthetic Greig wanted."

For wide shots of the beating, the main source was the X-Light softbox diffused with ½ Soft Frost. Close work was keyed by the Image 85 softbox, which was hung very low, “literally 2 feet above Ray Liotta’s head," says Kornemann. “It was a not an easy scene to shoot. We were in wetsuits for two nights while they dumped rain on us continuously! Ray and the other two actors were terrific sports about it." Fraser had an 800-watt HMI Joker Bug mounted to the camera for part of the scene to achieve what Kemp describes as “a front-lit photojournalistic effect."
comments powered by Disqus