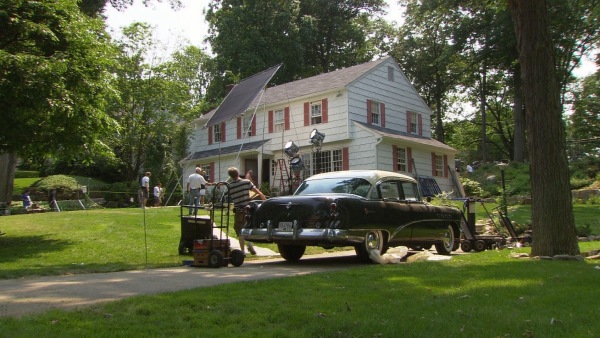 For the most part I shot 'Rev. Road' with an 85 on the camera, though sometimes I used an 81EF, because there was a lot of movement from interior to exterior and gelling the windows was not always an option.
“Locations like that only look good for about a half-hour or an hour at a certain time of day on a good day, but you can’t allow for that. It takes an enormous amount of light to maintain a naturalistic, consistent daytime feel inside, and the house was backed up against a hill, so getting light into the upper rooms and into the kitchen around back was tricky.” To accomplish this, his electrical crew, led by gaffer Bill O’Leary, bounced 12K Arri Compact HMIs off 20'x20', 12'x20' and 12'x12' sheets of muslin or Ultrabounce set outside the windows. “For the ground-floor scenes, we worked off the grade, and on the second floor, we worked off a scaffold,” says O’Leary. “The rigs danced about a bit to accommodate the shots, and the beauty of a single-camera show is that this is possible; the closer one can work to the edge of the frame, the better.”
“We had the house stripped apart and rewired so we could use the sockets in the walls, and we also put power points in the ceilings so we didn’t have to run cables in the room,” says Deakins. “We used no big lights inside, mainly 200-watt or 400-watt Jokers. A huge amount of the film was lit by practicals in the shot.” These practical table lamps and floor lamps held standard household bulbs ranging from 60 to 200 watts. For fill, we usually bounced Tweenies off 4-by-4 muslins, and the lamps and bounce material were often hung from the ceiling to leave the floor clear for the actors and the camera.
(ACM Jan 2009)
Without the use of any HMIs I would have used Maxi Brutes, or just 2K open face lamps, and lit directly through heavy diffusion but either way would have required a lot of power and would have created a lot of heat. If it had been a film where I without a budget for lighting I would have certainly suggested another location with a naturally lighter interior.
DAYINT

The front room and dining room were lit mainly using 12K HMIs and Ultrabounce material outside the windows but, as the windows were quite small, I needed to soften the lighting with something inside. Here I used 200W Jokers, which were again screwed to the ceiling or set on the floor to bounce off loose muslin that was mostly taped to the wall. The kitchen was pretty much lit in the same way but I did use more floor bounce to mimic reflected light from the hard sun, an 18K, that was coming through the window.

That particular shot was lit through the door and window on the left hand side using three 12K HMIs and three 12' x 12' ultrabounce reflectors and then diffused with a brushed silk or 251 at the doorway to the left of Kate. From the right side I used two 400 watt jokers bounced off unbleached muslin, which was taped to the wall. There was no top light used for any of the daylight scenes and all the interior light either came through the windows or was a bounce from 200/400 watt Jokers which were set on the floor or screwed to the ceiling.

The breakfast scene was lit with a direct 18K HMI to create the hard sunlight effect, which had 1/2 CTO on it, and there was also a low warm bounce to soften the whole image.

The shot you mention was barely lit at all. I had asked that we shoot that angle in the mid morning so the trees would not be front lit and there would be sunlight on the carpet beneath the window. The insert was lit to match the wide shot. I was probably shooting at 5.6 on 5217, but I don't know for sure. There was nothing out of the ordinary done to the shot in the DI.

I had a small grid rigged over the table and I seem to remember 3 or 4 Tweenies bouncing off unbleached muslin reflectors that were either hung or positioned on stands, depending on the camera angle. The lamps were on dimmers but may have also been warmed with 1/4 CTO. In the background, there were two 2.5 K HMIs positioned near the doorway and projected through a light grid cloth. These lamps were corrected with only 1/4 CTO. 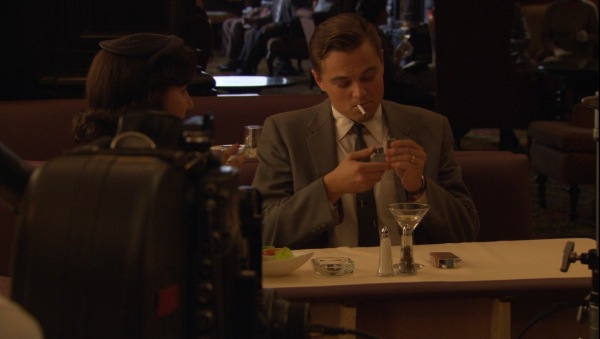 We ended up with a platform outside the windows that ran the length of the building.” On the platform, O’Leary’s crew rigged about a dozen 12K Arri Compacts bounced off 12'x12' muslins to send even daylight into the office. “It was the only way we could work,” notes Deakins. “There wasn’t enough natural daylight in the morning, and there was too much of it in the afternoon.” 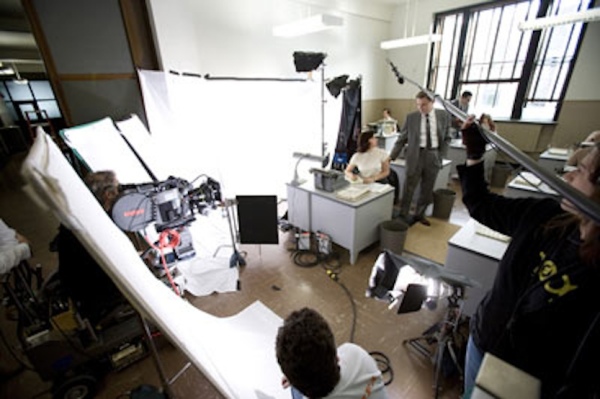 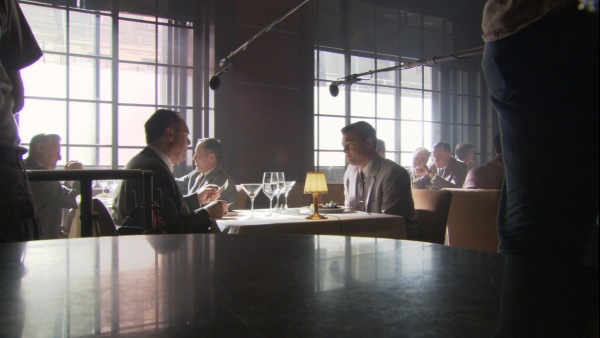 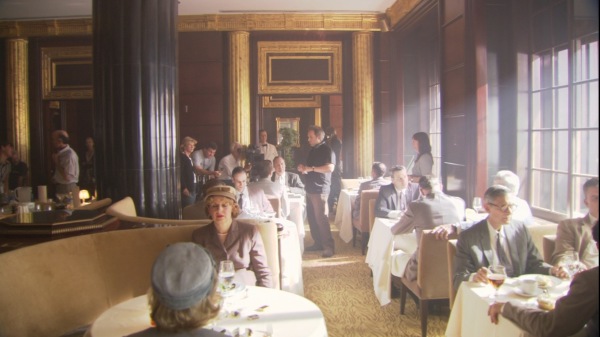 I did use the HMIs outside, probably 3x18Ks, and diffused the windows with a band of 250. There were no other lights as the 18s provided enough through the lower diffusion to add a softness to the hard sunlight effect. [ ?? seems more to this--a cutter for the faces? ] 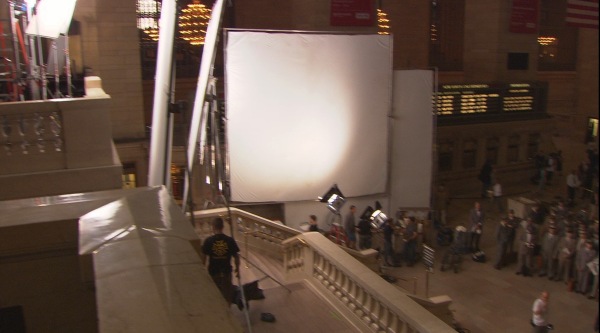 For that sitting room scene I was using 4 Tweenies rigged to the ceiling and bounced off some 4' x 4' unbleached muslin bounce material. the lamps would have been on dimmers and probably had a quarter CTO on them as well.

We boosted the [candle] effect with a semicircle of 100 watt halogen bulbs hidden behind the cake and dimmed down to match the colour of the candles. For continuity, I used the same light for Leo on his close shot.

the bedroom was lit using Tweenies bounced off muslin reflectors. This was a practical location so we mounted lamps straight to the ceiling or set them on base plates on the floor to shine at muslin bounces. The bounces were worked on stands and moved per shot. I used some 1K Fresnels, without lenses, to get the hard light coming through the windows. We had to shoot the scene at night as I needed to set these lamps about 10 feet away from the windows. We did at one time tent the whole house to shoot some night work downstairs but this would have been too costly to do for this upstairs bedroom. I was only using three or four Tweenies at a time. The bounce was always quite close to the actors, maybe three or four feet away, as the room was small. I did flag the bounces as much as I could but never as much as I would have liked, again because of the small space. 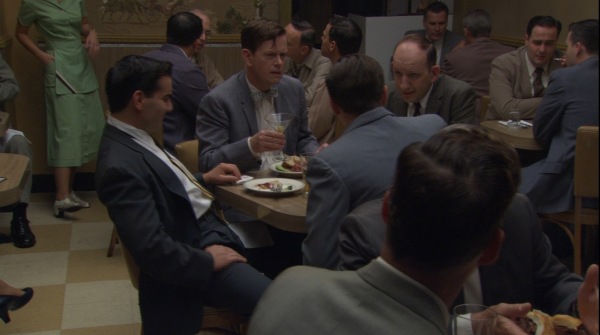 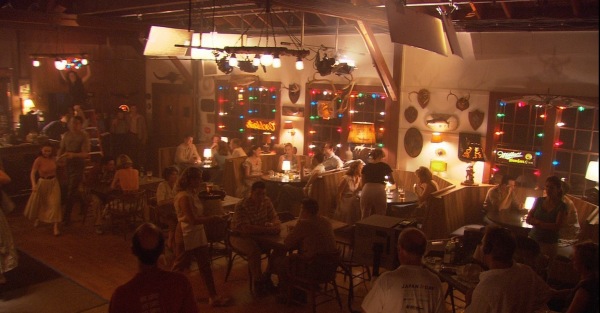 The bar/restaurant was certainly lit with more than the practicals. I had a small grid rigged over the table and I seem to remember 3 or 4 Tweenies bouncing off unbleached muslin reflectors that were either hung or positioned on stands, depending on the camera angle. The lamps were on dimmers but may have also been warmed with 1/4 CTO. In the background, there were two 2.5 K HMIs positioned near the doorway and projected through a light grid cloth. These lamps were corrected with only 1/4 CTO. 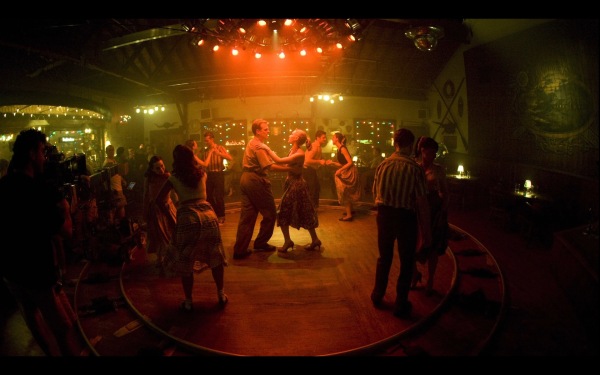 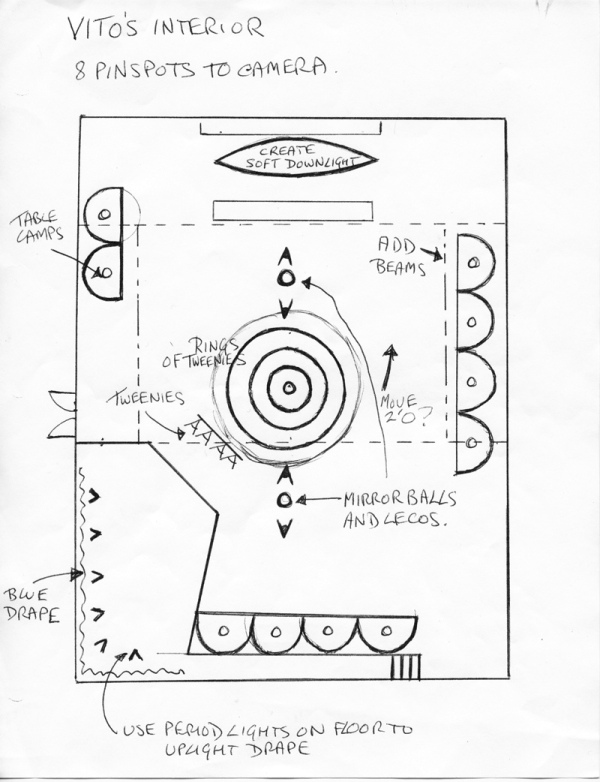 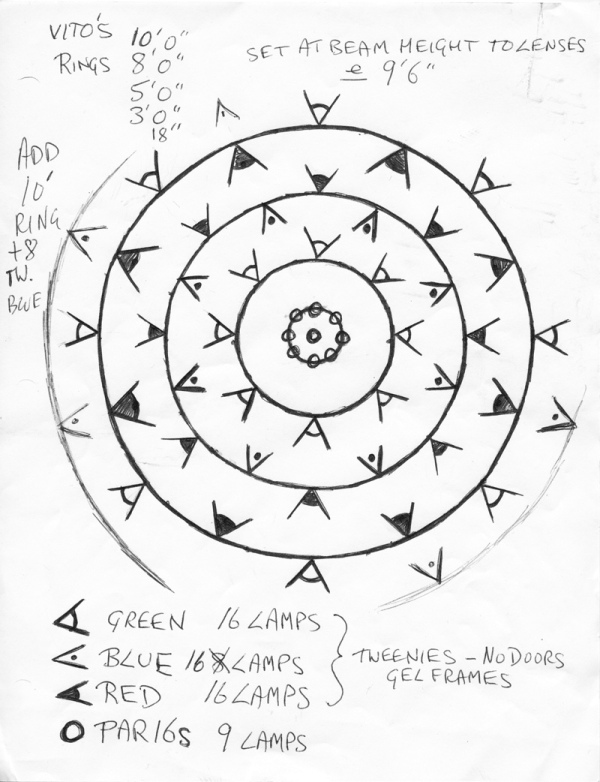 Vito's roadsidebar: We had to shoot a lot of work at this location in two or three days, and this rig allowed us to change the feel and color of the light quite quickly.”
DAYEXT
FORESTtag

The hand held sequence in the forest was not lit at all.
NIGHTEXT

The characters in this shot were lit entirely from the floor using gold stipple reflectors. I think I was using 1K fresnel lamps and Tweenies. There was absolutely no top light and I very rarely use a top light for separation as you say. The background buildings are lit with bare 60watt household bulbs and a couple of strip lights dimmed to give a warmer colour.

All of that sequence was shot at the very last moment of dusk. Shooting on 5218 tungsten without correction and underexposing about a stop to a stop and a half. The point of view of Kate at the tree was the final shot we did and was a little underexposed. We had to do some work on that particular shot in the DI. There was some additional lighting inside the front room but nothing in the kitchen or outside: one 12' x 12' bounce outside with a 4K HMI and a 200watt Joker inside bouncing off bleached muslin. We used 1/4 and 1/2 Blue on the lamps to match the dying daylight.

The car scene was basically lit by the headlights and the overhead practical lights, which we had installed and rigged with 2K bulbs. The'headlights' were par bulbs, which were back to a dimmer. We also added some bounce light on the floor just to wrap the light around the faces a little more.
The period streetlights manufactured by the art department that each held four 2K 3200°K bulbs (standing in for the 8'-long fluorescent tubes that would normally be used in the fixtures); the lights were positioned along a gravel turnoff that had also been created by the art department. “In some shots, you can see about a mile and a half down the road, and there’s no way we were going to light that, so we just let the passing cars’ headlights be the background,” says Deakins. “Of course, because they’re period cars, we had to replace the headlights with stronger bulbs, tungsten Par 36s, run off batteries and inverters.” O’Leary adds, “We outfitted about two dozen period cars [that way]. It’s probably the iffiest situation a film electrician can get into - batteries and inverters are notoriously unreliable - but it all worked.”
CARtag

-- The filmmakers considered shooting the driving portion of the scene practically, but Deakins suggested using poor man’s process instead. “What we needed to create in the car was the feeling of Frank’s headlights bouncing back from the road onto their faces, and I knew I could do that in a barn,” says the cinematographer. “We found one that gave us about 40 feet of space, and we did the shot very quickly in a couple of takes. We’d scheduled two days for the same scene when we planned to shoot it on the open road; at that time of year, darkness lasts little more than five hours.” To create the feel of headlights approaching and taillights retreating behind the Wheelers’ car, the crew put four Tweenies (two for headlights and two gelled red for taillights) on dollies that were pushed back and forth behind the car as the lights were dimmed up and down. A little dust was added to the rear window to slightly blow out the lights. “For the front,” says Deakins, “I did exactly what I’d have done if we’d shot on the road: I put a fluorescent tube on the [hood] on a pole and had it moved up and down very slightly to give the light on their faces a bit of life.” (ACM Jan 2009)
-- lit using two 1K Fresnel lamps bounced off 8x4 polystyrene sheets. ?? (Deakins forum)
-- I generally use four or five dollies of some sort to create the feel of headlights behind the picture car and sometimes I project bulbs through the back of a side shot using an elastic rig and a wire.
-- [looks like car is moving side to side!!]

That scene was lit using 2 x 1K Fresnels bounced off 4' x 4' gold stipple reflectors. Each lamp would have been wired down so that I would have been shooting at an exposure of 2.5 on 5218 stock. In the front of the shot, through the windscreen, is a lake and we placed 8 or 9 Tweenies on the opposite bank to reflect across the water and give the highlights you see. The lake was approximately 600' across
More stills from the film:
NIGHT EXT
Source:
http://www.rogerdeakins.com
comments powered by Disqus