I had 12' x 12' Ultrabounce about 10' beyond those windows with 12Ks on turtles beneath the windows bounce up. There was a light diffusion on the windows themselves, yes, and I believe that was a 251. There was also a 1/2 CTO on top of the diffusion in order to balance back toward the fluorescent lights, which were themselves close to tungsten.
I believe I was using two framed 4' x 4' bounces of soft unbleached muslin for that close shot on Emily. The units used might have been 400 Jokers with I/2 CTO.
Fluorescents were the original fixtures but we had to change some of the ballasts, to mitigate some bad flicker, and we also changed out all the tubes. The original tubes were all over the place colour temperature wise. I seem to remember that every diffuser also had a piece of 251 added to soften the light even further. This also had the effect of warming the light slightly.

There was some light coming from that laptop and there was a white bounce board to the right of camera. I was playing the scene with the florescent lights on in the kitchen space.
NIGHTINT 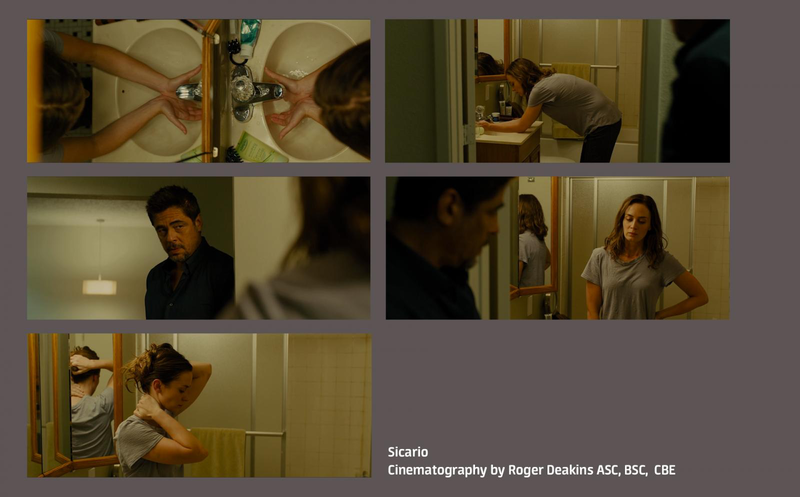 The whole scene was lit using 4 x 40 watt bulbs in a batten strip (reflection in the faucet), although I believe I added one or two globes to soften the effect for the close shots of the actors. I also bounced a Tweenie around the strip just to soften the edge of the light. In the back of Benicio's angle there is a Tweenie bouncing on a wall to give a little more shape there. I just tape muslin (calico) to the wall and bounce the Tweenie off that. I this case the lamp was probably carrying quite a bit of wire as I did not want much out of it in such a small space. 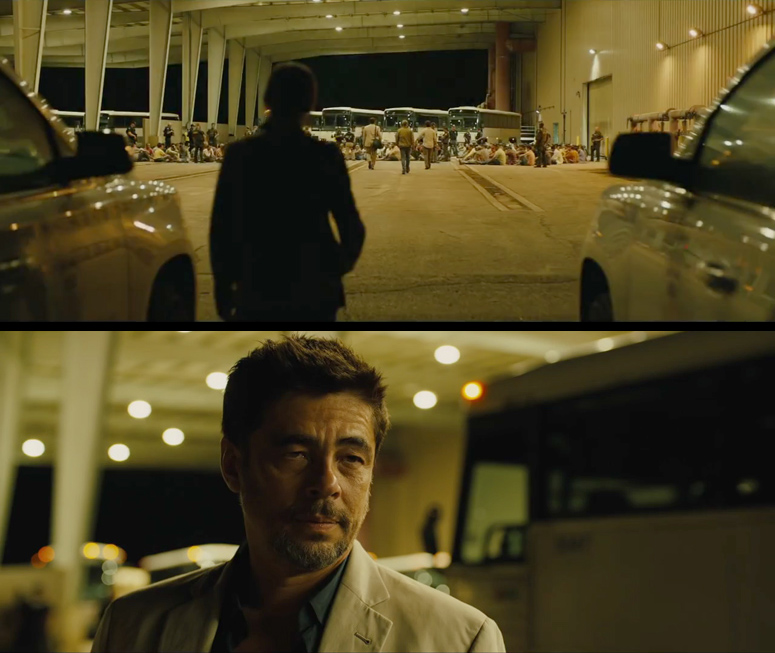 That was probably the most difficult location. It was a fertilizer plant. We had to shoot everything in two nights. Sicario was not a big-budget picture, so we had to be prepared to go in there and shoot 15 or 20 shots in a night. You’ve got to give yourself a lot of flexibility and be able to shoot 360 degrees. The existing lighting was blue-green mercury vapor, but there was no level. At the beginning of the scene, the shot is so wide that you see the entire thing. I figured out a rig to light the scene in a way I liked that also looked realistic in the location.
It was a scene we couldn’t light conventionally. We physically fabricated all the practical top lights. Patrice and his crew made open housings, like bell lamps. We put a 2K Blonde in each one and a 10K gel frame with very light diffusion and ¼ CTO. They were all on dimmers as well. We rigged something like 45 2K Blondes under the roof, which was about 50 feet high. The grips had to lay in pipe and so on to give some security to these practicals. This took a bit of doing. I think it looks real, which is the main thing.
I went there twice before the shoot, first when the grips and electricians had put up half a dozen top lights. I wanted to see what 2K Blondes in those scoop fixtures would actually give me. I didn’t want to get there on the day and be screwed. Then, I went back when the whole thing had been rigged and played with the dimmers. I wanted the brightest space in the middle area, where most of the immigrants sat on the floor; we dimmed the ones on the outside and left the ones in the middle full up, so you had a slight fall-off as it went to the outside, and the color got a bit warmer. We left some existing sodium lights on the west wall; they were quite orange, and I liked that. By dimming the Blondes down a bit and adding ¼ CTO, the top practicals looked like sodium lights, but not quite as orange as real sodium. 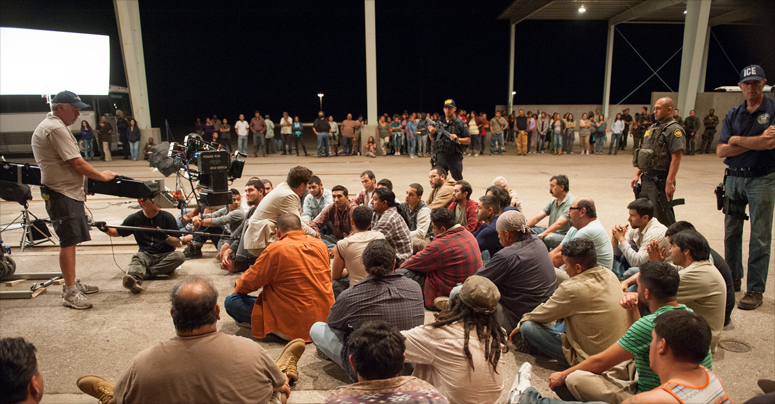 I had some bounce on the ground, but not too much. We had some low 1K Fresnels bouncing up into 8 x 4 sheets of poly. It was warmer than the top source.
NIGHTEXT

I had additional lights augmenting the headlamps of both cars for specific shots. Silvio in this reference image is lit with a Tweenie bounced off the road, literally bouncing off the hardtop, as a white reflector would have been too strong. The second shot is lit by the headlamps of Silvio's car with two Tweenies added in close by.
That was true night. I wanted a much more menacing look to this night work and it was never necessary to see the surrounding landscape. It was important to see the surrounding landscape in 'NCFOM' or 'True Grit' but here it was more interesting for the scenes to play out in black surrounds. Besides, the scenes in those two previous films too place away from the range of any practical sources so there was no justification for this 'pools of light' approach. I had done something quite similar in 'Fargo'.
DAYEXT

We carefully planned which shots we’d do, because we knew we’d only have 40 minutes to shoot every shot we wanted. So we set up three dolly tracks on the roof, and we just flipped the camera from one to the other. I don’t really use much [bounce] on exteriors these days. For the border-crossing gunfight, I did use some big bounces around the car, but not a lot. I don’t remember using anything on that roof scene, but we were so lucky — we had that brilliant light. You didn’t want to do anything to it, really.
Source:
http://www.rogerdeakins.com
comments powered by Disqus