He shot most of the picture with Primo lenses in three focal lengths: 35mm, 50mm and 75mm. “I think it’s a very interesting discipline,” he notes. “Henri Cartier-Bresson used only one lens in his life. I can tell the actors generally enjoy the friendly and consistent distance from the camera. The idea of avoiding wide angles and telephotos was also to respect the real scale of the landscape.” One of Delhomme’s most important lighting tools was a simple white bedsheet, which was either laid on the ground or walked with the camera. “For exterior shots, it’s often the quickest and best bounce you can get on a face,” he explains. “I’ve lit many, many shots like this. I never use polystyrene for an exterior.
NIGHTEXT

sky as a bluescreen in post, when stars would be added. I polarized the sky as much as I could to separate Charlie, the horse and the tree from the background, and I exposed the scene like a normal day scene. In post, we desaturated all the color, and it looks like a real moon.
DAYEXT

In all the scenes in the crevasse [where Arthur is hiding], I was bouncing 12K Fresnels directly on the rock to match the texture of the existing light.” To evoke the blinding glare of the outback, Delhomme exposed for the shadows while shooting landscapes. He often exposed 2 stops wider than the reading he would get under direct sun. 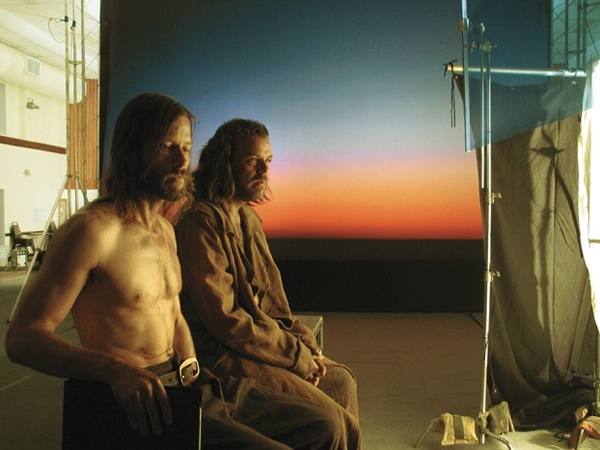 for Charlie and Arthur’s extended dialogue, a fleeting sunset wouldn’t do. Delhomme had to combine location shots with a sunset that was re-created in an improvised studio in Winton. “At the beginning of the dialogue, you can see the sun on the horizon, and at the end the sun has disappeared. We did two or three real sunsets, using our crane and remote head for all the wide shots.” These captured the men from the rear, silhouetted against the sunset. “We took high-resolution stills of the sky at the key moment and created a 20-by-20-foot TransLite backing for the studio work. I really wanted to avoid using a bluescreen. To create a sunset glow, I centered a 20K Fresnel behind the backing very low to the ground, like the sun below the horizon.” Delhomme’s strategy enabled Hillcoat to work with the actors on close-up profile shots for a full day, without the time crunch of magic hour. To re-create the waning light on the actors’ faces, Delhomme used six Redheads “bounced on bedsheets and some layers of [251] diffusion and CTO and Yellow gels to get the right texture and color.
DAYINT

Lighting with 12K and 18K Fresnels through each tiny window and used no fill at all inside. Exposing for the highlights, and the shadows were 4 stops under in some corners. I always try to build a black tent around all the windows so I can start my lighting from scratch and create the contrast I want for the whole day.
Source:
ACM May 2006
comments powered by Disqus