CAMERAtag
an electric golf cart and a Libra head have worked very well for us. For the most part we have been using a Giraffe crane with a regular remote head when the horses are only walking. There were also some shots we made with a mechanical horse towed behind an insert car mounted with a 17' Technocrane arm on a Humvee, but that set up only has been of limited use.
DAYINT 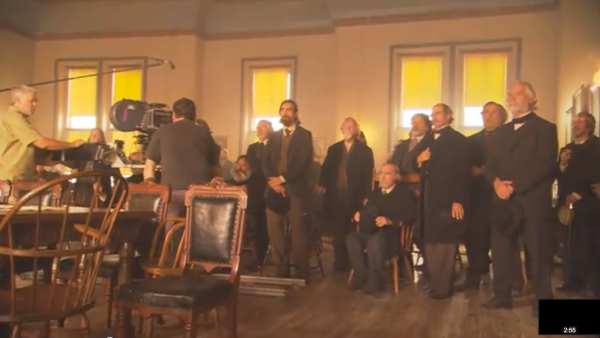 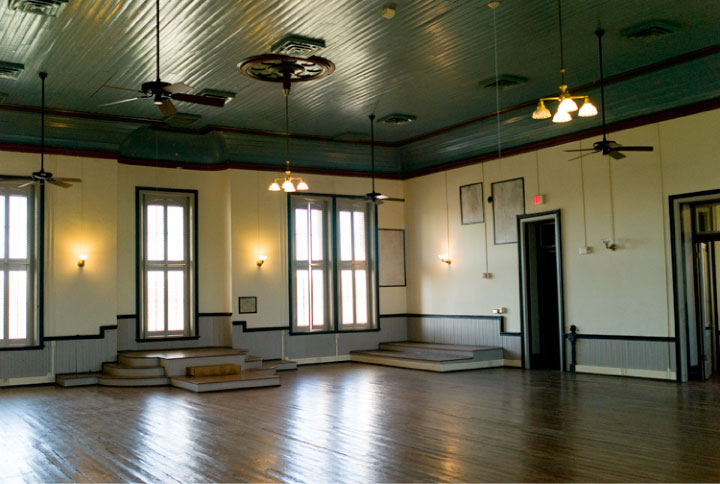 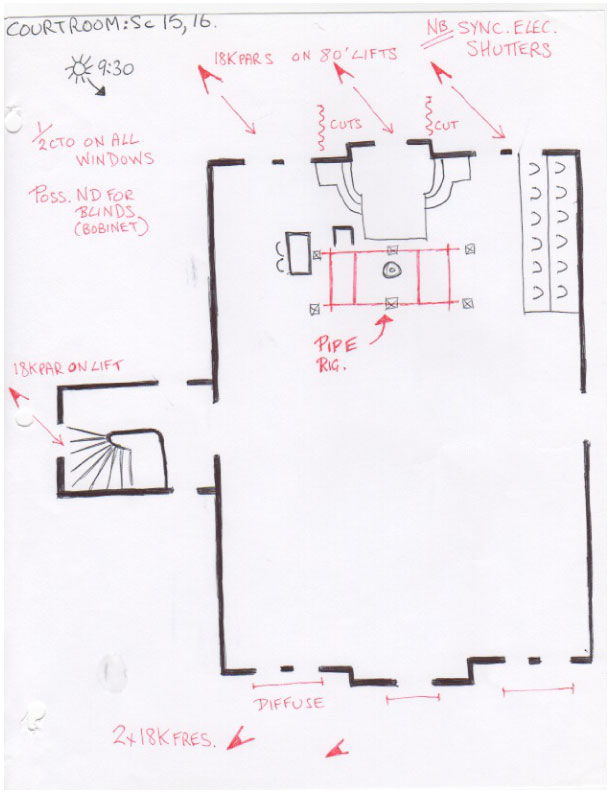 “The courtroom (in True Grit) was primarily lit by the light coming through the windows, which was created using three 18K HMI PAR lamps. Those HMIs were used direct without diffusion. The beams were created using a little smoke and the lamps were about about 20' from the windows. Windows gelled with half CTO. The blinds, which were a warm yellow, as well as the gas lamps on the walls, which carried 250 watt globes dimmed way down, created the warmth in the room. When we were looking away from the windows I augmented the light with a couple of 2K Blondes bouncing off some muslin, which was hung between the windows."
In that courtroom scene I was shooting then close shots at the same exposure as the wides but just adding that little bit of light to the face with a bounce card or two.
The problems we faced in lighting this location was that the windows I was going to light through faced south and this necessitated not only lifts of some kind to carry lamps but also lifts to carry large solids to cut any natural sunlight.
The yellow blinds were designed for the windows to cut down the opening through which the artificial sunlight was falling but also to heighten the feeling of the warmth and intensity of the light.
NIGHTINT

All the firelight scenes were augmented. I had some half circle metal strips made with sockets for 250/500 watt halogen bulbs with 3" spacing. Each series of bulbs were broken into three circuits and two were run to flicker generators. All the bulbs were dimmed to mimic the warmth of the fire. In the cabin we had made the back of the hearth removable and three if these 'gags' were mounted behind the fire. The oil lamp on the table was rigged with two 200 watt bulbs.
NIGHTEXT

For the exterior campfire scenes one or two of the fire ‘gag’ lights (metal strips made with sockets for 250/500 watt halogen bulbs with 3" spacing. Each series of bulbs were broken into three circuits and two were run to flicker generators. All the bulbs were dimmed to mimic the warmth of the fire) were set into the dirt behind the fires and that and the fire itself were the only source.

The scene was shot in the evening under fading light so as to allow for a good exposure from the match. I used 5217 [tungsten] with no correction to enhance the twilight look and the match naturally came out with a warm glow.

The Boarding House was motivated by the practicals we set to the side of the doorway but there was an additional bounce light coming through the door. This was a gold bounce source with something like 4 x 2Ks, which had a half CTO and were also dimmed to create the colour you see.
There was no way we could get the distance from the Boarding House that you see at the beginning of the shot, as there was a bank across the street, so it has been digitally extended and the snow added in front of the out of focus image. Most of the snow in the later part of the shot is in camera but some has been enhanced.
Interestingly we intended the shot to be from one side of the Boarding House with the rider going away from camera and we did shoot a version that way at dawn. I struggled to make the angle work at night with some atmosphere, to silhouette the horse, but it proved impossible and so we did the shot at dawn. The version in the film was a shot we made in the middle of the night when we had some downtime as we waited for the dawn.

That night scene was lit by the rig that we used for all our night work at that location. This was a series of 12K HMIs, 18K HMIs and 6K PARs rigged in rows on the tops of the hillsides. There were a total of 55 lamps used for the rig but at any one time there was a maximum of 29 burning. A second set of lamps were set so that we could change the direction of the light during our shooting night without taking time to re set lamps. The lamps were set at 4 feet apart on long walkways that were constructed for ease of operation. The tops of the hills were rocky and would have been treacherous for the electricians to work on at night. The idea behind using a row of lamps was to create a soft wash of light rather than one large point source. With all that light I was still shooting at a T 2.0 with 500ASA stock.
There were three very different parts to the night work outside the cabin and I had to have the basics of each lighting scenario rigged from the start. Some lamps were moved from the first lighting position to the third position by our rigging crew during the daytime hours to save some of the rental cost of such a large total.

MOONLIGHT: I do underexpose for a 'moonlight' look but by how much depends if the light is a back light, sidelight or a frontal light. My exposure might vary from a stop under to one and a half stops under. I underexpose a front light about 2 stops. For a back light the face may be as much as 3 under whilst a pure back light may be something over a stop under. This is just a basic level, which is something close to what I worked with on TG, and it will vary depending on the contrast within the shot. A dark subject will demand less underexposure. Of course, the levels will vary depending on the nature of the film and the scene in question.
Often there are practical considerations to whether I choose to bounce light or go direct. For the large night scenes around the cabin in 'True Grit' I used mostly direct lighting to create the moonlight effect. The space was just to big to light with a bounce source and, besides that, any bounce source would have been uncontrollable in terms of what was lit and what wasn't. To create a soft 'look' I ganged up some 30 lamps with 5' spacing between. For closer shots I find a softer source often, though certainly not always, seems more 'natural' even though natural moonlight is virtually a point source. 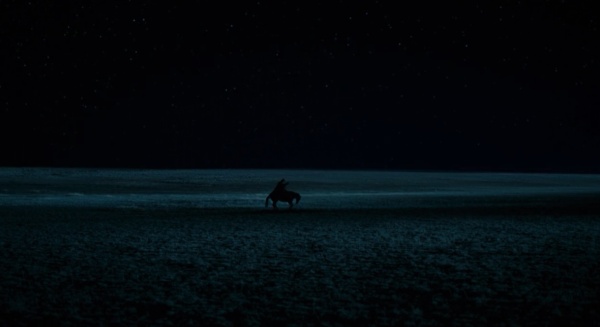 18K HMIs on Condors - also very far away. This still reference was not the hardest shot to do as the horse was quite static and the light grass picked up light quite well.

The far harder work was to photograph the galloping horse in the forest and for this I used a large crane with a row of 9 18K HMIs softened with a diffusion frame. All the shots of the galloping horse were done on location. Only the close shots of the actors were done on stage against green screen or against black.
I never considered Day for Night as being viable for any of True Grit', though, naturally, it was suggested as an option by our line producer. The fact is that, even if I could have accepted the 'look' of Day for Night', shooting to maintain any sort of continuity of lighting direction, at that time of year and given the complexity of the sequences, would have been impossible. Night for Night gave me far more control over the shooting even if it did demand a complex lighting rig.

That shot of Rooster shooting the horse was done on stage. There was a 12' x 12' Ultrabounce something like 20' from Jeff with bounced 2K Blondes. 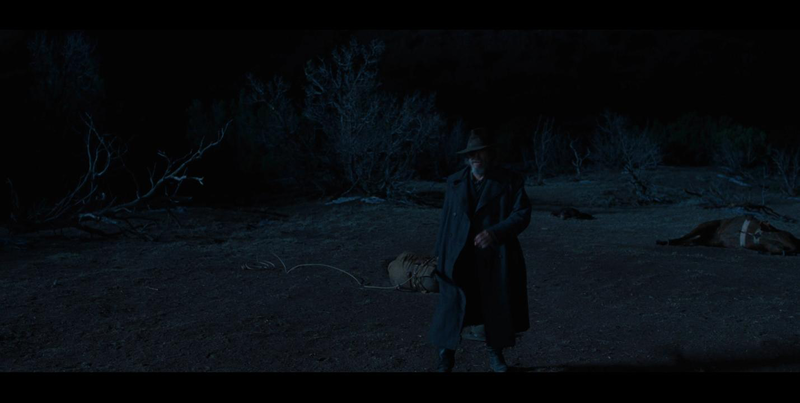 lit using a bank of large HMI lights. I needed my light sources at some distance from the subject so as to limit the fall off of the light over the set. In both situations I used uncorrected daylight sources, HMI lights, and a tungsten balanced film stock.
Source:
http://www.rogerdeakins.com
comments powered by Disqus